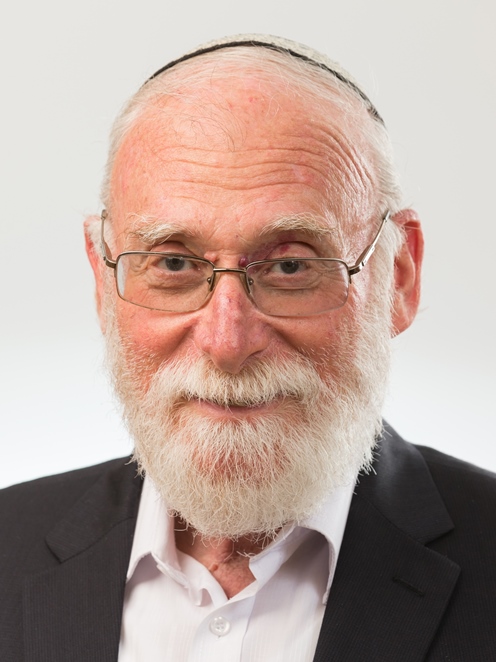 Rosh HaYeshiva, Rav Mordechai Greenberg, shlita, came to Yeshivat Kerem B'Yavneh in 1960, after graduating from the "Yishuv Hechadash" Yeshiva High School in Tel Aviv. He was recognized as one of the Yeshiva's outstanding talmidim, and became a close talmid of the founding Rosh Hayeshiva, Maran Rav Chayim Yaakov Goldvicht, zt"l. As a Hesder student, Rav Greenberg served in the tank corps of the Israel Defense Force, and he fought in the Six Day War.

After completing the Hesder program in Kerem B'Yavneh, Rav Greenberg served for a short time as a Ram in Yeshivat Or Etzion, as well as in Yeshivat Hakibbutz Hadati there. After marrying Bilha Zuckerman, daughter of Rav Avraham Zuckerman, shlita, Rosh Yeshivot Bnei Akiva, he returned to Kerem B'Yavneh to join the Kollel, and emerged as one of its outstanding avreichim. During this period he traveled with his contemporaries to hear weekly shiurim from Rav Zvi Yehuda Hakohen Kook, zt"l, and became very close with him as well.

Upon completion of the Kollel program, Rav Greenberg was appointed a Ram in the Yeshiva, and taught both Israeli and overseas talmidim. He was later appointed Rosh Kollel L'horaah, and, during a sabbatical, served for two years as Rosh Kollel at Yeshivat Ma'aleh Adumim. In 1988, he returned to Kerem B'Yavneh, and held the position of Rosh Kollel L'Dayanut for six years until he was appointed Rosh Hayeshiva in 1994.

Rav Greenberg is well known for his erudition in the field of Halacha, and for his command of Jewish thought (Machshevet Yisrael), particularly in the teachings of Rav Kook, zt"l. He is the author of Birkat Eliyahu, an explanation of the Be'ur HaGra (the Vilna Gaon's commentary to the Shulchan Aruch) on hilchot shabbat, and has published numerous articles in various Torah journals. He is a well-liked public speaker, and is often sought after for his excellent shiurim in gemara and halacha and lectures in Machshava.

Rav Greenberg is known in the Yeshiva for his diligent dedication to learning. He can be found in the Beit Midrash before shacharit reviewing the Daf Yomi, and maintains regular chavrutot with young talmidim during seder hours. He deals with the talmidim, Israeli and overseas alike, in a warm and open manner, inviting them for shabbat meals and oneg-shabbat tishes, and giving special shiurim and chugim to various groups. In his sichot, Rav Greenberg stresses the importance of learning Torah together with growth in middot (personal character), and on a meticulous observance of derech eretz as a prerequisite to Torah. Torat Yisrael is woven in with the importance of Am Yisrael and Eretz Yisrael to form a single, cohesive unit.

Rav Greenberg has initiated a number of programs to enhance the Yeshiva and its contributions to the community at large. Among his initiatives are: a program of Bekiut tests on a broad range of subjects (gemara, halacha, mishna, parsha, navi) to complement the in-depth iyun learning; a mechina program for motivated, academically qualified students with weaker Talmudic backgrounds; increased involvement of the Kollel with the students through a "bayit cham" program and their learning alongside the talmidim in the main Beit Midrash; Kollel Programs in development towns such as Lod and Mazkeret Batya. His integrity, and the straightforward and modest manner in which he leads the Yeshiva, promote a general atmosphere of independence throughout the Yeshiva.

The Greenbergs have eight children, and are now taking great pride in their role as grandparents.